GOOD SHOP
Find the best deals at thousands of stores and a percentage is donated to MNBR when you choose us.  Kohls, Bath & Body, Chewy, Home Depot, and many many more!

Make sure to come celebrate 2022 Wigglefest
and Our Sweet 16! 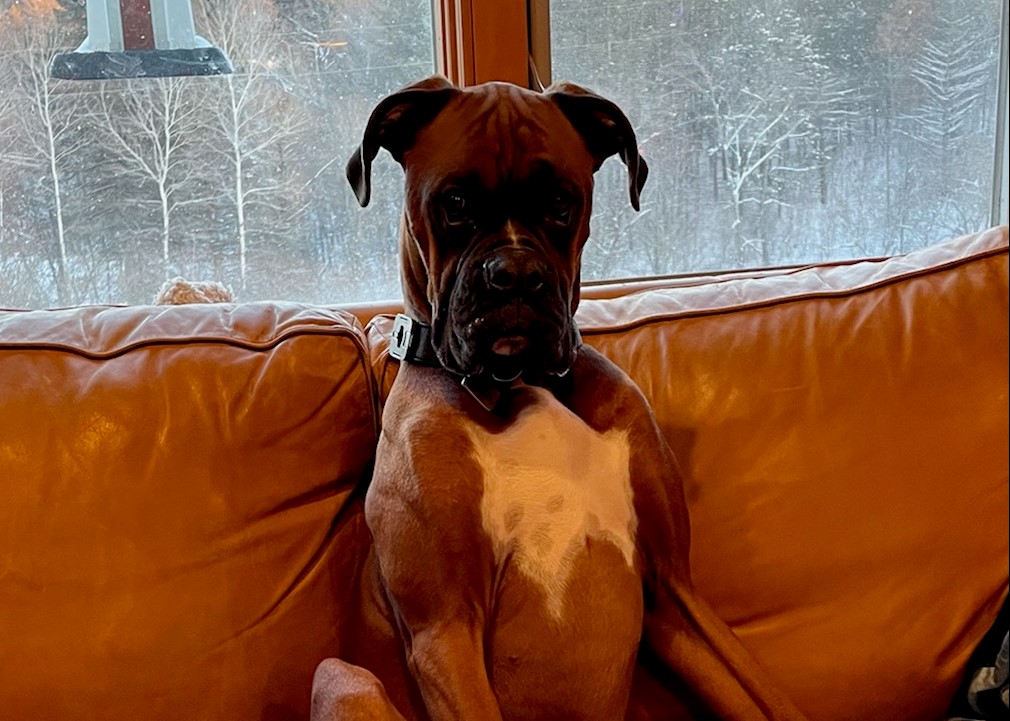 Learn more about the Boxer.

Have a couch? Put a boxer on it!

Although I have to be the only kid in the house, I have a huge bubbly personality to make up for it. I love long walks however I am not very good with strangers. A high fenced in yard would be best for me!


*Update 3/16/2021*
I am heading into what I hope is my FUREVER home. I am going to do a few week trial and I can not wait. I hope it goes smoothly and they love me as much as I will love them. Cross your paws for me!

Chevy is doing great in his foster home. He misses his daily long walks but we get out energy in the house with his toys and a bit of wrestling around. He is enjoying the gifts he has received from so many of his fans, squeaky toys galore although he plays rough and they don't last long LOL. He has a new winter coat that goes on so easy and he doesn't fuss about wearing it so that's great! He is such a snuggler now. When he first came to his foster Dad he was content sleeping/lounging solo but these last few months he has really taken to being a 60lb lap dog and quite the snuggler which to be honest is why boxers are the best! He is fine in his kennel when alone in the house, he does like to counter surf a bit though when no one is looking. Overall Chevy is a wonderful dog, He will add joy to whoever is drawn to him. He is sooo handsome if you think he might be the boxer for you please inquire, he is the best!

*Update 9/10/2020*
Chevy has been taking lots of walks and working on more calm behavior when we come across other critters and people. If we can, we stop and observe until the tree kitties (squirrels) become boring and we move on. Chevy is really a snuggler during the day, at night he is a solo kind of fella and likes his space. He is really quiet at night and no surprise needs to go out. He is obedient and listens well when you have a little treat for him, he is a little stubborn in some cases but with direction he complies. Never will have a problem getting him to go for a car ride he loves to feel the wind out the window. He is really a good boy for the right home (high fence LOL). He is very athletic and high energy.

New to rescue 9/15/2019
*Chevy came all the way from southern Missouri and is settling into his foster home.  He's a goofball and adores people.  He loves to be with his people.  He loves the car and exploring his neighborhood.  He is crate trained!  He will easily knock over kids, that is one reason why he was surrendered. We are working on his resource guarding and he is a fencer jumper/climber. He is also working on learning to be introduced to other dogs in a safe and proper manner, but he will thrive on not having to share his humans with any other pets!

Chevy will need continued training with his adoption family!

Is Not Good with Dogs, Not Good with Cats, Good with Older/Considerate Kids Only, Good with Adults, Cratetrained, Likes to play with toys, Obedient, Playful, Affectionate, Eager To Please, Goofy, Not good with small dogs

Click one of the boxes below to complete an application: